Life-like reproduction of acoustic recording is my primary goal. To achieve this goal my loudspeakers must engage the room neutrally, allowing room reflections to be delayed replicas of direct sound. This requirement demands a controlled radiation of sound waves both on and off-axis (Constant Directivity).

Nearly all commercial loudspeakers; typically woofer-midrange-dome tweeter in box arrangements (example) are unable to meet this requirement. Hence I build my own.

An ideal polar response of a theoretical constant-directivity loudspeaker.
As you move to the sides of the loudspeaker, the sound level decreases uniformly
across the whole spectrum from 20-20khz. This is not achievable in practice (yet).

S15 Econowave DSP, a variant of popular box and waveguide/horn topology
like the Econowaves, JBLs, Gedlee or PiSpeakers. Excellent directivity down to 1khz (2π), which gradually transition to omni-directional (4π) at lower frequencies.

A normalised sonogram plot of S16 & R16 Constant Directivity Dipole Loudspeakers.
90° waveguide dispersion gradually transition to 120° dipole down to 20hz!
This is the closest to ideal.

With the advent of computer-based realtime analyzers, it is possible for amateurs to build such loudspeakers at relatively modest cost. All of these projects were built  using active  analog or DSP crossovers and multi-channel amplifications.

Based on S16 prototype these loudspeakers were commissioned and shipped to participate in a US audio research project (Princeton University 3D3A)
more ... 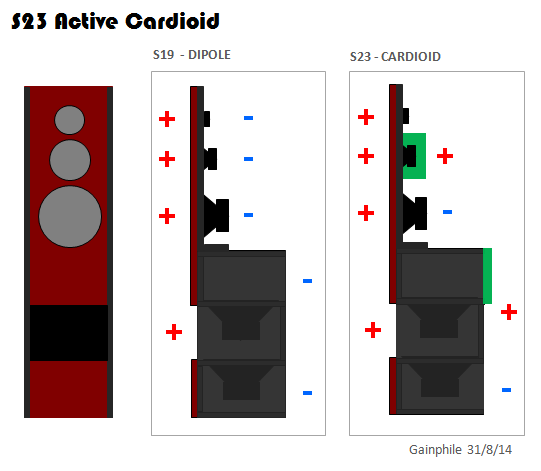 Cardioid loudspeakers have desirable traits when place in a room. However they are normally difficult to design and build. Using S19 platform two alternating channels are converted to monopoles, which provides the acoustic sum as Cardioid.
more ... 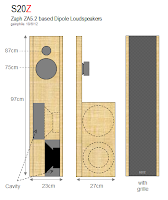 S20-Z Compact Open Baffle
This is a design for ultra-compact and economical Open Baffle design, similar dimensions to a typical 5" hifi floorstander.

While open baffle loudspeakers provide the outmost transparency and openness due to absence of box, they are normally very large and expensive to build. Zaph had done the hard work of providing an excellent 2-way loudspeaker kit, and we simply take this kit as a basis for this design.
more ... 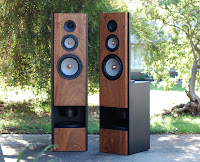 Coverage of frequency range from 20 to 20khz is improved by using a small midrange driver from 400hz to 2khz.  The tradeoff with 4-way dipoles are complexity and more difficult design process to take account of polar response changes.
more ...

An attempt to improve high-frequency directivity of Dipole loudspeakers. Based on S12, various combinations of tweeters, compression drivers, and waveguides were investigated.
more ...

This is a fully-documented build with variations of drivers used. You can also purchase the DSP configuration file to speed up listening to your music!
more ...

A true open baffle with its simplicity (no h/w/u -frame etc.) I have observed that there is something about them which other variations simply can't match due to very uniform polar response.

A Dipole Bass Array below could be used to increase the absolute bass SPL of these loudspeakers using 8 additional woofers, effectively making them 4-way system.
more...

These were built to revisit the previous design which measured and sounded most natural and smooth. So much that the further effort to obtain dipole bass quantity had to be scrapped.

The wide, pistonic dispersion of small 5" drivers combined with narrow baffle allows very smooth and uniform polar response to 2.5kHz, which is almost one octave above the high xo frequency. The loudspeakers are actively driven using 6 separate amplifier channels and allows potential addition of woofers for more low-frequency output.
more...

These are open baffle speakers for the desktop. They are 2-way system with active crossover and eq circuitry. The woofers are Seas L21 and the tweeters are TangBand W3-1364. They are designed to produce 40Hz dipole bass.

The distance to rear wall is about 35cm. I could not hear any faults despite general requirements for dipole speakers to be away from walls. This could be due to the nearfield listening location and that the relative distance is more important than the absolute one. Comparing to my living room dipoles (which is 1m from rear wall), maybe a bit less soundstage, but that's really nitpicking. Phantom image is very scary, almost like the speakers making no sound and the music comes out of the wall. Listening to some classical recording I got goosebumps. If there is one best thing that stands out from them, it's the midrange.
more...

Concepts and Work in Progress:

These are $150 "Open-Air" headphones which have strong popularity among head-fi enthusiasts. Among the general consensus are high-resolution, airy sound. I heard them first when JP Howard  brought them to my house and was immediately impressed.

Upon hearing the headphones for the first time, I noticed they sound too bright for my liking. Hence I measured and investigated an optimum correction equalizer
more ... 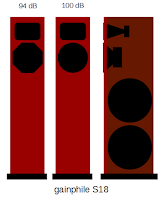 An attempt for smaller form-factor constant directivity design. It will be high-sensitivity speakers with 8" woofers and dual 12" subs.
more ...

An investigation to double the number of woofers in a dipole system, which would provide additional 6dB of maximum output.

LinkwitzLab Pluto Clone
A genius Omni-Directional speaker design by Sigfried Linkwitz. They sound as open as dipole speakers with some superiority in the imaging area. However my clone lacks the transparency and clean sound of the open baffle.

Never embark in loudspeaker projects without adequate measurement tool. The ears are not to be trusted. The good news is a set of measurement tool can be build for under $70, including the soundcard!

My high-resolution music collection has been growing, mostly sourced from Vinyl/LP rips. They are superior than normal CDs which are recorded at 16/44.1kHz.

Off-the-shelf audiophile media center or server are very expensive (read: Linn DS is $15,000!). Comparable solution could be built for under $400, including the sound card and Laptop.

In this iteration I want real dipole radiation front and back, and uniform to very high frequencies. This can only be done with extemely short front-to-back distance.

The "tweeters" used are TangBand 3" full-range. They allow three things to happen:

This was an unsuccessful attempt to use fullrange drivers as dipole tweeters. Constant directivity was achieved up to excellent 10khz, yet the system did not sound coherent.

S10 OB - Seas L21RNXPWhen I saw someone was selling a pair of Seas L21RNXP really cheap on ebay I couldn't resist having a go at rigid piston driver. The most interesting finding was that S9 and S10 sounds similar, albeit the difference in xo point, baffle width, and cone/driver material. I was therefore convinced sthat if the design goals are met (frequency response, polar response, etc.) then speakers would sound similar. I prefer the S9 above for cost and aesthetics as they are smaller.

Dipole speakers with 6x 10" woofers as their main strength. It gives great bass, but unfortunately the 5" P13WH midrange is acoustically to small for the 30cm baffle, and hence do not sound smooth. I have since went back to slim baffle as the S9. These speakers were presented at local Australian hifi hobbyist meeting (SNA).

S6 Open Baffle
Experiments with large 15" Eminence Alpha woofers. I have since learnt that better result would be obtained by smaller drivers.

Stealth, Stealth 2, and Stealth3Various attempts for a low-frequency extension desktop Open Baffle speakers. They were huge and not aesthetically pleasing.

First open baffle system
The genesis of my dipole speaker designs. It was passive and utilised wide baffles. Even with all the inperfection I felt this was the right direction. There is a youtube clip of them here.

Loudspeaker journey
Various undocumented speakers built in the past for fun, amusements, and curiosity