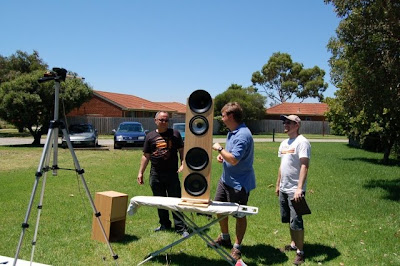 The S16 being measured in free space condition.
Roger, Paul, and Daniel are seasoned loudspeaker enthusiasts and builders.
Melbourne 15/1/2011


Work in progress to improve high frequency directivity of S12.


Summary of Midrange and Tweeter variants:

You can compare the directivity plots above with typical dome tweeter implementation:

We see narrowing of loudspeaker polar response, followed by "tweeter blooming". This is an expected response as the tweeters would behave omni-directionally at transition frequency. Humorously known as the "Klingon bird of prey" polar response :)

Recently a combination of large woofer and waveguide are becoming very popular, similar to the S15 Econowave build. While these types of speakers can provide constant directivity down to 800-1khz, unfortunately they soon transition to omni-directional at lower frequencies:

There is a certain correctness about the sound of speakers with such smooth directivity from 20Hz to 20khz. It is immediate and dynamic. However with any loudpeakers they have plus and minuses:
Strength:
Very dynamic presentation. Willing to play effortlessly at very high SPL. Sound is very 'direct' and make dome tweeters sound diffused in comparison. Very natural.

Weakness:
Lack of rear HF radiation (arguably ok or even necessary), some degree of horn and compression driver coloration make them not as smooth as dome tweeters. Flat dipole bass is unable to pressurize the room effectively below 40hz, although these can easily be substituted with H or W frame dipole radiators.

As comparison, here are the bark wavelets of Elias' Dipole Line Array, 20ms and 150ms:

Tried Selenium D220Ti compression drivers with B&C DE250. These drivers use Poly cone material and have a smooth but 'mellow' sound. Read about my burst signal test investigation here. (note: update 22/9/11, I prefer the cheaper D220Ti as a more accurate transducer).

The polar response is excellent and comparable to D220Ti although mounting adapters have to be used. 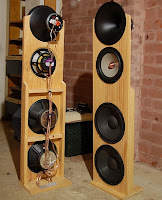 The Excels are interesting. When I tap the cone interestingly they don't sound like typical metal drivers. They sound like polycones! Magnesium are lighter than aluminium and apparently Seas were able to make a thicker cone for the same weight, providing better damping.

Replacing the Aluminium L21RNX/P there were only 2 differences. The cone resonance peak (W22 is about 100hz higher) and region between 1khz-2khz. Frequency response-wise they track within 1-2db. It was also interesting to note the behaviour of the resonance. It's different. The Aluminium has periodic resonance after the main one, while W22 has only one major peak and drops after that. Both L21 and W22 have serious drop about 2khz and really the 1.5khz XO is really pushing it.

Now, after only minor adjustment, which is the metal cone notch I sat down and listen.... Tonally they are inseparable. They sounded very much the same. However the Excel have this specific character that is quite difficult to explain. Basically it sounded mellow and laid back, but with resolution and transparency. It projects refinement and practically makes any music with overtones sounds......beautiful?? They reminded me of the Orions.

I think, however that the Excels are lacking the gusto and immediate transients of the Aluminium L21 especially playing percussive instruments.

30/10/11
S16/MS
Building the 16/MS (magnesium, symmetrical)
The objective is to provide front-rear controlled directivity of tweeter region, with symmetry. This was not able to be done with Waveguide/compression driver combination.

To the rescue is Vifa DX25 loaded with Monacor WG300. The dispersion is respectable (not as good as 16/M) but more importantly the small dimension allows back-to-back setup. 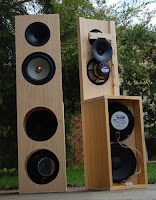 The polar response is not as smooth as large waveguide in S16, but it is sufficient to match dipole's directivity of -6db @60deg. When moving around the speakers I could hear the level drops uniformly. It is the best compromise so far between directivity and front-rear symmetry.

27/11/11
S16/MSXT
Replaced DX25 with XT25 ring radiator. The benefit is elimination of 12khz null thanks to the phase plug. This version was shown at Melbourne round-trip GTG.

Deep reverse null showing excellent time alignment and phase tracking. Also displayed is the difference between DX25 and XT25 when loaded with the waveguide. The lack of phase plug caused ~12khz null with DX25. 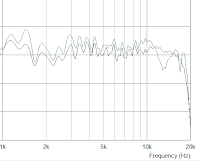 I wanted better HF resolution which only rigid/metal dome tweeters can provide. A quick experiment mounting a Titanium domeVifa DQ25SC16-04 to the Monacor waveguide resulted in good result. I removed the phase plug of these drivers.

When loaded with the waveguide a 10+dB peak appears. This is excellent as we can notch this peak and resulted in lower distorion (distortion figures of these drivers are already excellent). It also resulted in excellent phase tracking, despite the non-matching diameter between waveguide throat and the dome. To my surprise the lack of phase plug does not exhibit a dip in the response (that 18khz dip is inherent to the driver).

The smallish waveguide loses directivity at 2khz. The polar response is not as good as a proper 10" waveguide, but definitely much better than normal dome tweeter on a baffle.

I prefer the sonics of these drivers compared to XT25 and earlier DX25. They are very transparent and detailed. YMMV. (Update 8/1/2012: They are not nice visually. The dome is light-reflective and draws attention. I liked the black XT25 better and have reinstalled them). 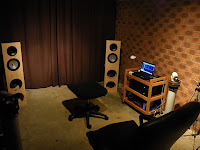 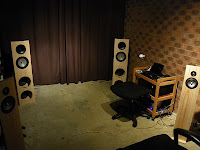 Update 31/1/2015
A 'released' build of this prototype is being commissioned: Gainphile R16

any possibility to give a try to ribbon tweeter?

How does this system sound in comparison to the ones you've built previously?

It's the best so far, but not without faults.

Been watching your work, very nice.
The best so far with faults?
Where is your remaining concern, plots of data, or how it sounds?

I thought you might be interested in what I have done tweeter wise.
I took an old Scan Speak D2904-60000 and removed the front screen and the back, then put a monacor waveguide on the front and a second on the back- a near perfect fit, this gives me a dome dipole tweeter.
Removing the tweeter back also dropped the cms hence fs. This fs change and the efficiency increase from the guides made it a reasonable replacement for the Orion Milleniums in delivering low distortion at target volume, and enabled a crossover lower than the point at which the mid starts to have difference in polar pattern front to rear at 1200Hz, an attribute that led me to stick with my 7" (Scan Speak 18W) drivers.
Between the waveguides was filled to give a toroid shape dipole dome tweeter.
The mid is also a toroid, round in front view and a seperate structure to the tweeter. The mid is 1200mm above the floor and the tweeter is below and physically time aligned, hanging from a frame (appearance improvement required) as I figure using a delay in the crossover wont suit such a dipole pair. A single Peerless 830500 is on the floor, mounted in 6 old 340mm bearing outer races from train gearboxes which gives me a D = 300 and 25kg of mass to stop the floor pretending its a drum.
Polar pattern seems to be OK, though I dont have your measurement system to plot the radiation pattern and just used point data, pen & paper.
I will leave the structure now and try to extract what I can from the MiniDSP 2x8 through topology and other adjustments.
The orion topology make sense, and it feels like SL opts to avoid any room corection to avoid phase errors with notch filters for a one size fits all solution. It feels less than the MiniDSP can offer for a bespoke system.
I currently am settled on a tune which was matched to a one octave smoothed t/f using REW5 shelving corrections in the room rather than free field, putting as much as I can in the input section to avoid phase errors across drivers.
Using notch filter for room correction appears to add distortion unless they are far enough away from the crossover. That will do for me for now, I will go freediving rather than playing with speakers for a few years, though may keep tracking your progress.
Russell

Thanks for your elaborate comments Russel. It seems you have sorted out your build to optimal level!!

The 'issue' I am having is particularly with the forward-only directivity of the waveguides. It is an unfinished business, hence I am very intrigued with your approach re: back-to-back dome waveguide!

Hey Gainphile, you seem to emphasize the importance of narrow baffle for midrange more than many OB designers.
How about placind midrange (i.e. Seas Excel 18cm) on 45cm wide baffle above tweeter, only abt 5cm to the top edge. In theory the gap in uniformity of polar response caused by wide-ish baffle will be compensated by sound radiated upwards and reaching out over the top baffle edge.
What do you think?
Due to some woodwork and design limitations I may have to go for this option. Testing the prototype proved to be quite successfull.

Hello Gianphile,
I'm very impressed with your work.
At the moment I've pair of dipole speakers that are a clone of a 10"Silver Iris Sterling Hawthrone with H-frame Alpha15 sub woofer.
Tehy are coaxial speackers that use the 10" mid woofer cone as wave guide for a Radian 475PB compression driver.
Now I'd like to add a real wave guide at this tweeter.
Can you give me any suggestion of a good wave guide that can go down to about 1Khz/1,2Khz and don't cost too much? Normally my listening positon is at about 2 or 3 meters from the speakers
Ciao
Guglielmo
Italy

Hello Gianphile,
I'm very impressed with your work.
At the moment I've pair of dipole speakers that are a clone of a 10"Silver Iris Sterling Hawthrone with H-frame Alpha15 sub woofer.
Tehy are coaxial speackers that use the 10" mid woofer cone as wave guide for a Radian 475PB compression driver.
Now I'd like to add a real wave guide at this tweeter.
Can you give me any suggestion of a good wave guide that can go down to about 1Khz/1,2Khz and don't cost too much? Normally my listening positon is at about 2 or 3 meters from the speakers
Ciao
Guglielmo
Italy

Do you believe any dome tweeter without a phase plug will exhibit that null when loaded in a waveguide?

I would be perfectly happy with the XT25 however I've noticed that some other tweeters at the same price point, such as Seas 27TDFC, exhibit better harmonic distorsions below 2Khz and I might be using such a low crossover point in my application.

Your reply is much appreciated!

Stoo,
I'm not sure that the vertical response will influence horizontal one. I guess the only way to find out is build and measure :)

Anon,
I initially thought so. After all that's why all compression drivers have phase plug. But today I loaded DQ25 with wg (see update above) and no null! I crossed the XT25 at 1.5khz. I have tried 1.4khz fine as well.

sorry all for the late replies... busy!!!

With all this fuss, I MUST know... are you ensuring the reproduction of your digital music is bit-exact? I use foobar2000 with the kernel streaming module that bypasses the windows direct sound mixer and leaves the music intact as it was meant to be heard. Do you ensure that your digital audio player leaves the signal bit-exact or what?

Chris,
My interest these days are acoustics and perception. And given a room, it leaves the speakers.

In the past I had worked with electronics and digital players. But they are much less important.

Hey gain, have you ever tried an AMT type tweeter? They contain a lot of detail and supposedly the ones made in California come with the directivity you want built in...

Hi Dan, AMT are interesting and I would have tried them if it was not for the cost ! Cheers.