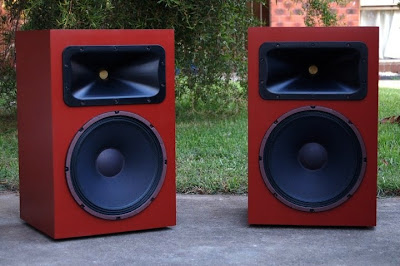 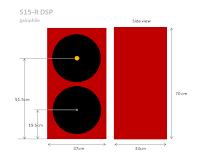 How about dipole mid-woofer with monopole subs? Dipole use avoids the nastiest room modes between 100-400hz(depending on room size and dimesion)and monopole sub retains punch and power at the bottom....

very nice work! I have simillar 2way speakers with software crossover. I'm about to buy the same amps as you use but I don't know how to control volume.. (I was using old receiver but it died on me). How do you go about controling volume? Do you use some kind of 4-way pot?

thanks
all best
martin

I simply control the volume before the xo. Not ideal but works fine and transparent enough.

Been following econowave and enjoy the work youve been doing. I was thinking of using minidsp for a pair of 4 pi speakers, so its great to be able to see your cd graphs to understand this stuff a little better.

Do you know if theres much difference between the gedlee speakers and the wayne parham speakers? Look very similar to me, both using same hf driver de250, but you never hear wayne mentioned, only ged lee.

You said: I will post the crossover programming file here once completed.

Do you have info on crossover points and steepness? I`ve built the Econo with the same drivers and used a miniDSP.

Frode, yes the setting is long overdue. I will post the DE250 version first, then D220Ti. Been really busy.

Hello, do you know what the crossover would be if using the Celestion CDX1-1745 tweeter instead of the Selenium D220Ti?

Hi Kalium, it should be the same as DE250 which hopefully I will post very soon.

When using your DSP settings in my own system,I came across a problem.The way you have the BSC set in EQ3,as a high shelf for output 1,wouldn't it only give BSC up to the crossover frequency and not affect the tweeter? Wouldn't a low shelf at 206 Hz with +6 dB gain be correct?
Thanks for your work in controled directivity,it has given me a lot of inspiration.

Steve,
That is correct, so the tweeter's attenuation level has accommodated this. The total frequency response is flat.

Normally +6db SLP is used, but the dynamic range has been used up for Linkwitz Transform. So alternatively -6db SHP is used.

Thanks for the reply.I now see the method to your madness! I also see the problem with the dynamic range.
Keep up the good work.

You guys have sonographs with the Celestion driver? Super curious how it stands up to the B&C.

Thank you so much for sharing your work. :)

It's a very good thing to use.

Gainphile....
Have you done any further listening tests on the Celestion CDX1-1745 driver? This seems to be a very economical unit that doesn't give up anything much to the DE250.
What about the Denovo CD's? Have you tried these/

Hi, MiniDSP is very quiet and I do not hear hiss, etc. The HF compression driver is *very* sensitive at 106dB so that's why I use passive L-PAD. With this the audible hiss from the HF driver is only from 10cm max. Even with ClassD amplifiers.

Good info about the CDX-1 1745... but is it really a worthy replacement for the DE250 since Celestion recommend's a minimum crossover of 2.2kHz and a lot of users report that it sounds harsh and distorted below 2.5kHz? Also the exit angle is 20.16° versus DE250's 14.6° (or even 12° according to Geddes who used to work for B&C) which may or not matter (does this explain the difference in your measured frequency response of the two?).

hello. settings dont appear to be correct compared to your reference pictures.
LT 35hz EQ1-4 gives this result, notice the big bump between 100-200hz:
http://i68.tinypic.com/21o22rc.jpg
while your picture is flat:
http://i.imgur.com/TzQuK.png
typed in manually multiple times, same result
thanks

This was due to me running an older version of the plugin which had bugs in shelving filters.

Let me revisit all these settings using the updated plugin.

For the first time in my life I see a sound box bass reflex duct without tuning. The woofer will damage!

A. Did you ever implement the 2x12" dipole subwoofers ?

B. Any changes/updates to the Econowave-DSP I should know of before I take jump ?

I know this is from a ways back, but when you recommend,

"Please follow the exact configuration of CD2 (DE250) for this compression driver."

The DE250 specs recommend a crossover of 1600Hz LR2 and for the Celestion CDX1-1745, they recommend a minimum crossover frequency of 2200Hz LR2.

Hi David, yes that is fine and what we had found out during a group testing.
ps. thanks for visiting. I had not been active for quite a while. Cheers.

Do you still have these speakers? Any update?

I'm wondering if you employed any traditional directivity correction for this waveguide? I can't see passive or active correction in your overview, only PEQ correction for waveguide/driver inconsistencies.

IME, the SEOS12 and Dayton H6512 both require directivity correction for a flat response with the DE250 in room.

How did you tackle the HF roll off on the directivity waveguide?

I typically use a high shelf from about 6khz to allow for directivity roll off.