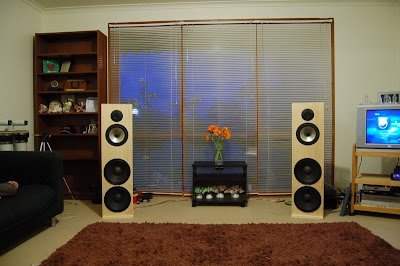 A true open baffle with its simplicity (no H/W/U -frame etc.) I have observed that there is something about them which other variations simply couldn't match due to very uniform polar response.

The tradeoff is absolute maximum bass output. A dipole bass array utilising a total of 8x 10" woofers could be added to overcome this limitation. Then the system effectively become a 4-way as well as requiring more space.

Click on the image on the left to see the functional diagram of the active crossover. The crossover can be quickly implemented if you have the budget to procure digital XO such as DCX2496. I use analog op-amps and prototyping board.

Much of the functions are clearly explained at Linkwitzlab website. What is unique is the need to compensate early rolloff of the Seas L21RNXP. The midrange exhibit some coloration due metal cone breakup harmonics and this would be the same even if you use the more expensive W22EX. It is not always audible and only appears in certain recording material.

Seas L21RNXP is an excellent unit aside from the normal metal resonance, however they have been discontinued. Seas L22RNXP is the drop-in replacement. Forget exotic drivers such as the W22, you may as well build the Orion. Why use metal cones then? Well the audible transparency of those drivers is unmatched. They are pistonic until that breakup arrives.

Hivi K1 tweeters exhibited very low distortion and excellent dispersion when crossed at 2.2khz or above with LR4. The tweeters can easily be substituted with something else, as long as the units have excellent distortion and dispersion. With those criteria it's hard to beat the cost of K1 ($12). Dispersion is very important, for example the popular Vifa XT25 would not sound as accurate due to poor dispersion. The venerable Seas 27TBFCG would be a good candidate and the cost is still somewhat reasonable. Better tweeters may allow you to cross lower and help reduce midrange breakup coloration, but not much. Ideally 8" metal cones like L21/22 or W22 should only be used below 800hz.

Building the S12 is straight-forward, however there are some important considerations.

The side panels are not to increase acoustic path length as normally done by dipoles with "wings". They are for structural reasons, and generally the narrower the better. Although they are very narrow indeed (4.2cm) the midrange section should not be obstructed. I have observed audible midrange coloration if the side panels are simply extended through the midrange height, although I do not see it in the measurement. This could be a very high Q resonance which are hidden by diffraction effects in measurements.

The cavity for rear tweeter must be blocked, otherwise it forms a resonator. Stuffing the cavity using polyfill only helped marginally. It has to be angled to minimise diffraction issue with the midrange.

Link to other designs

Hello. I am really interested in building a speaker like this, but using my active xo and 6 ch amplification. The thing is that I do not know of other woofers suitable for OB than the Eminence alpha 15". Those are the highest QTS units that I can get.

Please consider joining twitter and posting an update there when your blog is updated.