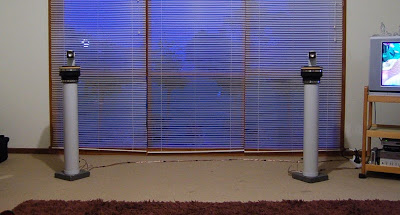 
So many good things has been said about this Linkwitz experiment ...

One say it gets too uncomfortably close compared to Orion Dipole ($8,000 system!). I am curious to see how it will compare to my OB speakers.

Importing a pair of Auras is not an issue ($60), but the woofers are too expensive for me. So I substituted them with a pair of Dick Smith woofers laying around. The base uses paving block readily available in the garden. PVC pipes and rubber coupler are available in Bunnings (Australia). 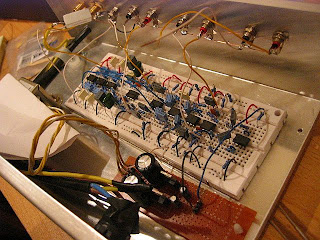 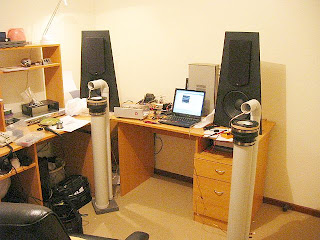 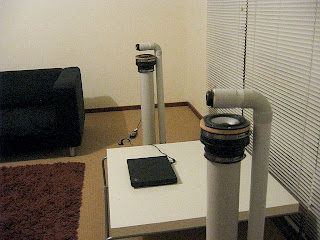 So I've been living with the Plutos for few weeks now. These are my impressions about this amazing little speakers.

Schematics posted on request. This is the same schematics available at LinkwitzLab. The greyed ones are not necessary, assuming you have a pair of stereo amps. I also removed the green ones because it sounds better subjectively without those. The green ones are tweeter phase delay and woofer notch filter. I'm not saying I know better than SL, just what I hear in my setup and my room. 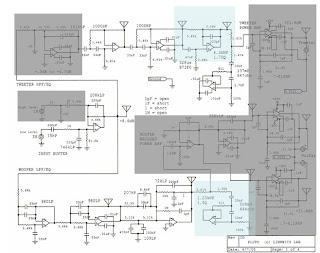 I added a shelving low-pass on the woofer circuit to give deep bass. But can't play too loud (it's loud enough for 5x6m room). No need for subwoofer. Use the non-inverting circuit.
(note: removed and replaced with Linkwitz Transform circuit in next update)

Small clip is available at YouTube. Pardon my digicam's limitations and the fact that they only take 30-second clips.

Revisited the equalization, and modified the Linkwitz Transform down to 20Hz. See design and conclusion here. In short, the low-frequency is extended but room modes issues still exist and manifest in boomy room sound.

A friend came over to hear the speakers. He was very impressed, in his own words "I didn't know speakers can image like that." Hence, he is currently building his Pluto2 (real one).

Damping is an interesting topic. This is my final damping fill using polyester fibers. There is also an extensive discussion about the topic here. Note that I am using readily-available Polyfill, not the more exotic acousta-stuff. 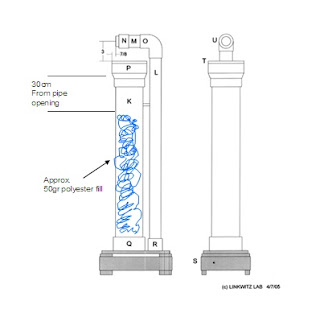 The pluto "imposter" was demo'ed at SNA Melbourne get-together (GTG). This is one of the comments:

"Now those little Plutos with some tracks had no right to sound as good as they did.Especially with that vocal track by Angelique Kidjo "Blewu" Amazing what you can make with some dunny pipes!!" -Joz

I am on business assignment for a few months in Switzerland. I brought the Pluto clones and their small footprint and light weight make them a great pair of travelling loudspeakers! 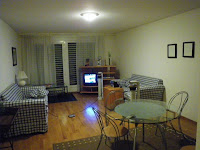 The Pluto maintains omni-directional pattern until 4khz where it starts to transition to forward-directional. The transition is excellent with minor widening around 15khz.

I'm wondering if you could post the circuit you used for the xo/eq. I just put together the BOM at Digikey and the total came to $480... ouch. Plus the cost of the boards/plans from Linwitz... that's a lot of money. So I was thinking I would try to put these together with pre-existing amps... if that fails I'll probably bite the bullet and buy everything :\

Nice job with these. I am considering building a pair myself, and have been waffling back and forth between the Pluto(2) and an open-baffle design (maybe the NaO mini, or something similar). Yes they lean towards dipole, but would you say they are a worthy replacement? Is it a good value and worth building?

If you're thinking of a dipole and able to afford room size, then skip the pluto :)

I'm considering building some of these but I just can't stump the near £500 quid price tag yet!
I'm keen to know what your thoughts are on their performance - are they as good as claimed. SL seems to be a really gifted and meticulous engineer but are there better alternatives? I see that you are developing your own dipoles. Should I hang on - are dipoles inherently better in your opinion? BTW been following your posts on the DIY audio forum - good stuff.

Even SL changes his mind on Pluto, just look at recently posted Pluto 2.1. So yes they are good but definitely not as good as dipoles. But then again dipole needs big speakers and complex XO. This is their achiles heel. At the same price level pluto will be better. When price is not considered then dipole will win. Price here means $$, size, and complexity like multi-amps.

hi! nice work here but a few questions here:
1) SL suggest 50W toroids for each Pluto. What size did you use(or may be you used another pwr amp)?
Don't you think it is severely undersized for three LM3886?

2) What op amps did you used? single, dual, quad version?

1)I used my quad-channel gainclone found somewhere in this site. The toroid is 160VA. The woofer definitely run out of steam far earlier than the amps.

Quick question. You mention that your build uses non-Linkwitz-recommeneded drivers, yet you use the original linkwitz xover.

Are the TS parameters of those Dick Smith woofers very close to the Seas or is this design not all that sensitive to woofer changes?

Specifically I'm thinking of building some of these with NHT NPT-11-080-1 5.25" Peerless drivers from Jack Hidley's site.
http://home.comcast.net/~jhidley/index.html

I plan to use active XO and DSP room correction with these.

Thanks for any insight! Great blog you have here.

I use different woofers, and as a consequence the Linkwitz Transform part of the EQ was changed. This is due to the difference of Fs and Qs of the woofers in the tube.

Hi, i've visited several times your nice page, and would like to ask a question:
i want to build an unexpensive+easy+excellent speaker.
Pluto seems to fit my needs. Problem: i am a soldering iron&electronics illiterate.
Question: Do you think it would be feasible to implement Pluto without the electronics, and use a behringer ultradrive dcx2496 -an active crossover+equalizer- plus a HT receiver with multichannel inputs?
A s/h ultradrive would cost me around 200 euros/260 US$ here in Europe. I own a suitable NAD HT receiver, so if feasible it would obviously be an unexpensive solution.
thanks!

Yes, that is a very good approach. You still need to know the parameters for notch filter and Linkwitz transform. Alternatively use MiniDSP which is more powerful and convenient to use for HiFi purposes.

thanks! a miniDSP+DIGI looks a smart solution for DAC+digital crossover. next, obtaining all that crossover&filter data and learning about their meaning...

Check this post for EQ settings others had done.

Although I still think it's missing the Linkwitz Transform for the woofer. But a good start.

hi, great DIY. a USP of pluto design is its simplicity in building. i want to build one. can you help me with construction. i dont have a construction plan. pls point me how and where can i start.

I've been experimenting with a pluto based design to replace the crap box speakers in my study. Currently I've got the proper Peerless/Aura drivers triamped with an underdesk subbie and using the foobar active crossover component http://xover.sourceforge.net/ I haven't done nearfield testing yet but already it sounds ridiculously good. Not all perfect below the 100 Hz cut because of the small room size and for this reason it may not be the final answer. The foobar setup is great for fast and flexible testing of crossover options and the price is exactly right ($0) It does mean I've had to ditch my DAC and use the sound card but the advantages completely outweigh this.

nice. hope you will present a minidsp version with the original seas driver in the future.
all drivers incl. stuffing cost only $230. minidsp $120.
the build should be simple for moust.

while the finished pluto cost $2995

Hi Gainphile,
I have just ordered drivers and I already have minidsp and 2 amps. Do you know the reason why SL is using 2 bridged LM3886 for woofer when transformer is only 50W

I noticed that the little 1.7 inch drive unit is open backed...

or maybe a pair stacked reversed and out of phase to create a open high frequency source?